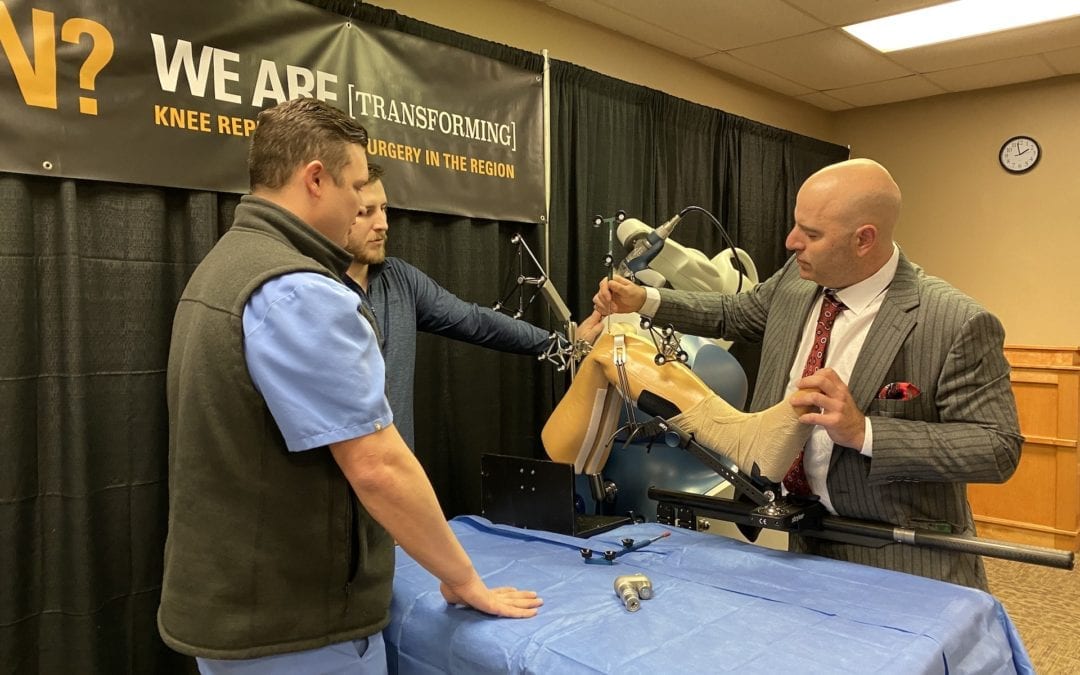 New Iberia is on the verge of having its very first robotic surgery available to patients of the Teche Area.

The Iberia Medical Center held an open house at its North Campus Wednesday to introduce its Mako robotic-arm surgical robot. The machine is designed to reduce any human error in orthopedic procedures, specifically hip and knee replacements.

“It removes some of the human elements, such as positioning of a manual saw or drill,” said Dr. Seth Rosenzweig, a Mako-certified orthopedic surgeon. “It helps with judgement in positioning implants and allows the surgeons to execute the plan made before they are in operating room, and executing that plan to within a quarter of a millimeter.”

Rosenzweig has been in private practice as an orthopedic surgeon for 11 years in Iberia Parish. Having performed more than 2,000 joint replacement procedures, he said the robot is just another tool to allow surgeons to better affect patient outcomes.

“It’s all about precision and accuracy, hitting the bullseye, and how many times you can hit the bullseye,” Rosenzweig said. “If i was a baseball player and I hit the ball 30 percent of the time, I’d be in the Hall of Fame. If I played basketball and scored 50 percent of the time, I’d be an all-star. For an orthopedic surgeon doing knee replacement, what is acceptable? 90 percent? I’d say, if you’re my surgeon, I’d want 99.9 percent accuracy.”

Although the idea of a robot surgery summons up images of science fiction movie sets, the Mako looks more like the bottom of an elliptical exercise bike, except instead of pedals it has an arm with an oscillating saw on the end. The technology used in the Mako robot is a little over a decade old, but it did not see use in the Acadiana area until about four years ago. The IMC robot is the very first surgical robot of any sort to be used in Iberia Parish.

The robot uses C/T scans, motion sensors and video cameras to align the surgical site and test the flexion and rotation of the joint. The surgeon has full control of the device at all times, and has to approve every move the machine makes. Fail-safes in the hardware and software ensure the robot will not cut any part of the site the surgeon does not identify.

“There is still a human controlling the robot at all steps of the way,” he said. “The robot is just guiding the surgeon to make the appropriate cuts and keep them from making the inappropriate ones. It’s programmed to shut down before you can make an inappropriate cut.”

IMC Director of Marketing Lisa Landry said that the hospital already has a list of patients who are candidates for robotic-arm assisted joint replacement surgery.

“With the robot, we see a quicker recovery and less blood loss,” Rosezweig said. “We are hoping for more long-term successes using this technology.”